Filmmaker and entrepreneur luke adams free-dived underneath an iceberg in Greenland’s 28-degree Fahrenheit water to raise awareness for men’s mental health. The project was completed in July 2022, and sponsored by Movemberthe month-long men’s health charity event held worldwide each November.

Adams viewed icebergs – whose ice tips can reach up to 300 feet above sea level in Greenland while about 90 percent of their full mass is hidden beneath the water’s surface – as a visual metaphor for the invisible (and often silent) mental health battles men experience. 80 percent of suicides are committed by men, according to the Centers for Disease Control and Prevention (CDC). Adams’ film aimed at inspire men to feel confident in sharing their mental health journeys, fighting the stigma men usually face when speaking about their mental health.

Adams swam underneath the iceberg without an oxygen tank, mask, or wetsuit and documented the experience in a short film. “I wanted to do something that had never been done before, in order to inspire men to feel confident in sharing their own mental health journey,” Adams wrote in his Movember article inJuly.

Adams is currently a creative director at Story Real Studios, a company based in Connecticut that creates video content strategies for purpose-driven brands. He detailed his own experience with anxiety and self-doubt for the past 25 years to Movember. “I’ve always had the impression that I needed to hide my struggles below the surface in order to appear ‘a man,’” Adams wrote. The stresses of running a business, financial pressure, and isolation during the COVID-19 pandemic pushed him into the darkest 12-month period of his life.

“It was then that I learned that asking for help wouldn’t make me weak,” he said, “It meant surviving to fight another day.”

Adams and his team faced transportation setbacks during the project due to sea ice. The water was also colder than they expected – Adams had been training in “just-above-freezing water” to prepare for the dive.

“Months of training, tens of thousands of dollars spent and a team of people counting on me, and I [was] ready to throw in the towel on the first day,” Adams remembered thinking after first experiencing the cold water.

On day two, Adams had second thoughts again when he initially submerged his face and began diving down the line. “But I remembered my purpose and pulled myself deeper,” he said. “As I descended further and further, both the urge to breathe and the freezing feeling disappeared until I felt total relaxation. Once I reached the bottom of the dive line, I took my mask off and swam towards the iceberg. I held onto the glacier for what felt like minutes as time slowed down to a stop.” 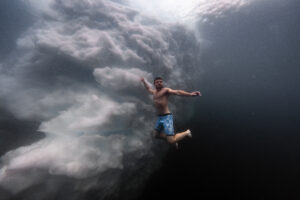 He recalled hearing the clicking of Daan Verhoeven‘s camera which reminded him to head back to the surface. And then he dove again, and again – a total of 12 times over the next few days to record all the footage needed for the short film. 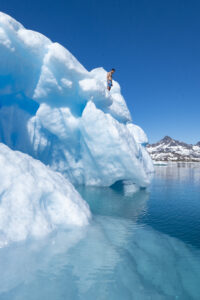 Luke Adams before a dive courtesy of Luca Malaguti

Adams’ short film was also sponsored by men’s fashion brand Sheath Underwear which pledged to donate 25 percent of all sales on the underwear line worn in the film to Adams’ Movember fundraising efforts which you can reach here. Movember raises funds for mental health and suicide prevention, prostate cancer, and testicular cancer.